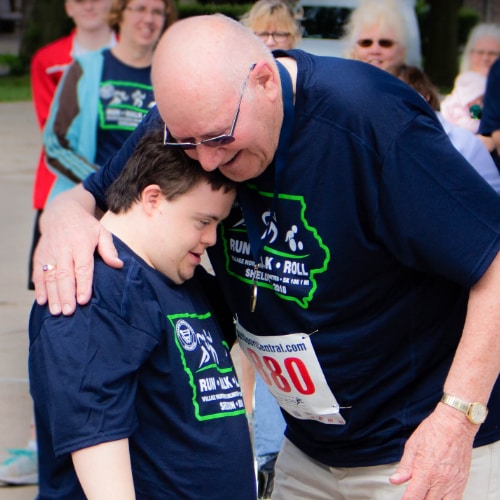 Looking back at the age of 89, that’s how Elmer Beltman describes his life. “I’ve been so blessed in my life, it’s really quite something.”

One of six children born to Dutch immigrant parents, Elmer declares, “I’m a result of my parent’s.” His Dad, a dairy worker from California, and his Mom, a housekeeper from Boyden, IA, taught him to be positive, and to be grateful in all circumstances. Values Elmer took with him throughout his life.

When Elmer was diagnosed with cancer at age 42, he told his wife Stella, and his six children, his goal was to make it to 84. “It sounded good to doubled up that number.” Said Elmer.

So when his family surprised him in 2013 by joining him for the event and providing him with T-Shirts the whole family wore commemorating his blessing of reaching his milestone number 84, he felt blessed again. The shirts supported Elmer and his “Hunnybunny’s”, an affectionate nickname that stuck with him since his very first grandchild, and has now extended to his 22 “grand hunnybunny’s” and 32 “great grand hunnybunny’s.”

This past year, Elmer and Stella celebrated another milestone number, 65, the number of years they’ve been happily married. “Yeah, I like those numbers.” Commented Elmer

Participating in the RUN WALK AND ROLL EVENT is For Everyone

When Elmer stopped farming and moved to town he began walking as a way to keep active. Something he grew accustomed to on the farm, walking everywhere including to country school. When he started walking, it was about 4 miles, 3-4 times a week, and soon became habit. Currently you may see Elmer out and about at the NCC LLRC as he typically gets in on average 2.5 miles a day 6 days a week (as his schedule allows).

“I’d like to see older folks come out and walk in this event. It’s not just for young people, a lot of older people like me could walk the 5k.”

There’s no doubt Elmer is an authority on that. He has managed to medal every year since 2011 at VNU’s Run Walk and Roll (his first year participating in the event). In fact, in 2019, Elmer hopes to medal in the very first 90+ category! An event the family is planning on attending with him again.