Village Northwest Unlimited in Sheldon, IA is proud to announce that Bob Stewart is among the 2019 inductees into the Special Olympics of Iowa (SOIA) Hall of Fame.  Bob was inducted at a ceremony in Des Moines Monday, December 2.

SOIA created a Hall of Fame in 2018 as a way to recognize longevity and achievement of athletes and volunteers with the organization.  A voting committee, appointed by the Hall of Fame Chair is responsible for reviewing all nominations and voting for the inductees.  The criteria for consideration includes participation for at least 10 years, illustration of dedication to a sport-specific training and competition, demonstrative positive sportsmanship, encouraging of others, and a significant positive impact within the Special Olympics movement.

Bob has participated in a variety of sports, including basketball, volleyball, softball, bowling, bocce ball and many others for nearly 35 years.  Bob was known for his quickness, and his last 50 meter dash, Bob was able to achieve the third place ribbon, at the age of 67.  Bob also demonstrated exceptional knowledge of basketball.  In addition, Bob had a tremendous ability to serve to any location on the court in volleyball.

Both on and off the court, Bob embodies what being a Special Olympic athlete is all about.  His kind heart and ability to role model has made him an incredible athlete and teammate.  One of Bob’s coaches, Sara Wolthuizen noted “Bob has set an amazing example for the rest of our athletes to follow.  He is everything you want in a Special Olympics athlete.  We could not be more proud of Bob and all of his accomplishments”

Village Northwest Unlimited is nationally recognized as one of the premier providers of services to people with intellectual and developmental disabilities, autism spectrum disorder or traumatic brain injuries.  Village Northwest Unlimited builds successful lives for 180 individuals by providing opportunities and choices in residential, vocational and social programs while fulfilling its mission of providing Purpose, Privacy and Dignity. 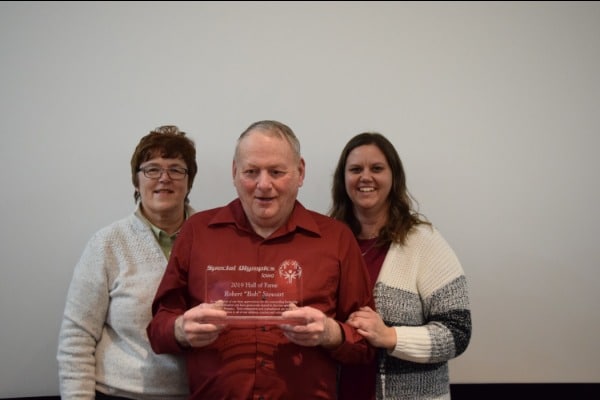