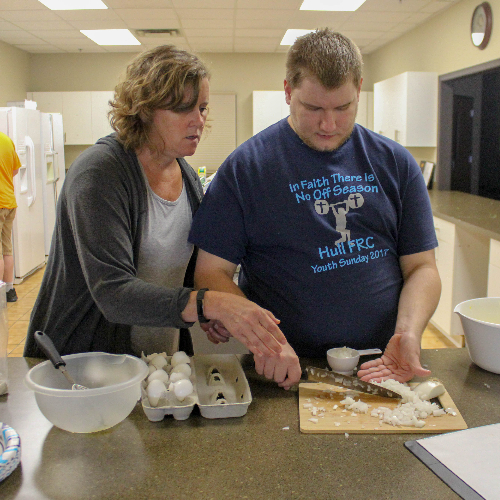 Success on the Job!

During a shift at the Sheldon Pizza Ranch, Alec was surprised to find out that he had won a bronze star award, it’s only given to staff who show exemplary care to customers and a good work ethic. Alec began working at Pizza Ranch in April of 2018. When he started, he struggled with having enough stamina and endurance to make it through an entire shift. Throughout a shift, he often felt overwhelmed and needed to take long brakes to calm himself. After a year and a half, he chose to quit the job because he wasn't enjoying it and was getting too tired during his shifts. During his time off from Pizza Ranch, Alec was taking classes at VNU to help him with his job skills. He was pulled out of his comfort zone with practice conversations and learning how to read expressions and situations.

In September 2020, Alec felt he was ready to apply for another position at Pizza Ranch. He was given the job and has been thriving since he began. Alec felt the classes he took at VNU had a big impact on the success he has with his job now. One of his big fears was talking on the phone, through job coaching and classes he built up enough confidence to start answering the phones at Pizza Ranch. When you call to place an order there is a good chance Alec may even be the one taking your order.

When Alec was asked what's different about his second time around at Pizza Ranch, he said he's found a way to put a little bit of his personality into his work. He hustles, rarely stands around and when he get's overwhelmed he's able to use stress management to recover faster than he did before.

Alec said he was shocked and speechless when he was pulled aside in March 2021 and given the bronze star award during a shift. His job coaches weren't shocked though, they new he had earned it. He's worked hard to get to where he is now and after years of support from VNU staff, Alec is succeeding at work.