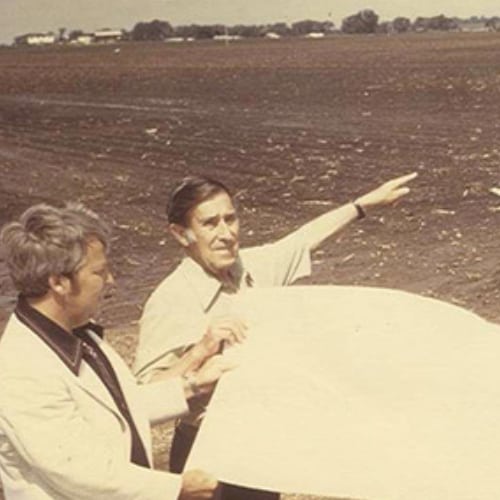 The idea for Village Northwest Unlimited of Sheldon, Iowa was first conceived in November, 1974, when Sheldon High School principal, Bob Hoogeveen, stopped to visit a friend, Lamar Esbeck, who worked at Handicap Village in Clear Lake, Iowa. "That was my introduction to the disabled," recalls Hoogeveen, founding Executive Director of Village Northwest Unlimited. "I was totally dumbfounded. The situation of the disabled was foreign to me until that day." That trip to Clear Lake proved to have a haunting impact on Bob Hoogeveen, and he was overwhelmed at his excitement of the possibility of Sheldon building a similar village.

As soon as Hoogeveen returned home from his trip, he contacted Dr. Ken Fertig, a local veterinarian and president of the Sheldon Industrial Development Corporation. He poured out his story, and before long, Dr. Fertig "caught" Hoogeveen's enthusiasm. Both men felt strongly about the crucial need for such a facility in Northwest Iowa. They agreed that the next move toward such a dream was to excite others. Within a few days, the two men had organized another trip to Clear Lake, but this time they invited ten of Sheldon's community leaders to accompany them. That Sheldon delegation traveled to Clear Lake with several motives in mind. Some admit their primary motive was to find a way to give Sheldon an "economic shot-in-the-arm" by enticing a new industry to their community. Not unlike most Iowa communities at that time, Sheldon was searching for new industries to keep their town thriving and economically sound. On their trip back to Sheldon, the group of Sheldonites found themselves flooded with all kinds of emotions. Their day's experience not only stunned them unexpectedly, but at the same time, had made them feel a deep concern and a crucial urgency to provide a similar chance for new hope and opportunities for other disabled adults. The attitude of procuring an industry for the betterment of Sheldon had somehow become secondary. Instead, the Divine Spirit was at work, directing the group to become involved for humanitarian reasons. And to God be the glory if Sheldon benefited in the meantime. "They came back from Clear Lake very moved. There was a real urgency to get started to get the ball rolling," Hoogeveen recalls. In November, 1974, the first organized meeting was scheduled at the home of Dr. and Mrs. Ken Fertig. That meeting proved to be the beginning of a new life for hundreds of disabled adults. At that meeting, the Sheldon group asked the Lord to lead them through the many difficult steps in such an accomplishment. Even though the hurdles seemed overwhelming, God's love and guidance provided the confidence and direction needed. Those at that meeting unabashedly recall how the room fairly illuminated with ideas, plans, and goals. There was no doubt that God was planting ideas almost faster than the group could discuss them. The total plan was to eventually build a Village with the resident's program center in the center and ten cottages surrounding that building. Each cottage would house sixteen residents, eight men and eight women, with a total population of 160 residents. The resident center would house classrooms, gym, whirlpool, physical therapy center, and administrative offices. Plans were made to recruit a network of Sheldon area people to chair extensive Village fund drives, even though the first donation did not come from the Sheldon area. "I recall our first donation," Fertig noted. "Bob and I were in Clear Lake at one of their board meetings, and Mrs. John (Doris) Salsbury, a Clear Lake board member, simply handed us a check for $5000 from the Salsbury Foundation. The Foundation wanted to help Sheldon's Handicap Village get off the ground, and they were impressed by the fact that Sheldon had not asked Clear Lake for any financing, only advice and guidance.' That $5000 was the beginning of the Village fund raising push. Several more trips were scheduled to Clear Lake for interested Sheldon area residents. Carloads and busloads of excited and curious men and women headed east on Highway 18 for the three hour trek to Clear Lake. Much like that first group of ten, each delegation returned emotionally moved and eager to become involved in the Sheldon project. The Sheldon Ad Hoc Committee, S.L.D.C., and Don Boyer felt the time had come to set up press conferences with area newspapers, radio and television to officially announce that Sheldon would go ahead with the 2.5 million dollar project for mentally and physically disabled adults. The word spread quickly throughout the four-county area, and with the help of Don Boyer, the next few months proved to be filled with excitement as well as hard work for those launching the project. Hundreds responded with positive attitudes, and many volunteered to become actively involved.

The Ad Hoc Committee felt it was time that a special focus be directed toward acquiring land for the Village. After all, how could a Village be built without first finding a site? Several volunteered to carefully examine land bordering Sheldon. The conclusion became obvious. The farm land north of Highway 18, located on the northeast edge of town, seemed ideal. The land was flat, had easy accessibility, seemed a perfect construction site, and was adjacent to the Northwest Iowa Sheltered Workshop, which had been in operation since 1967. However, that ideal plot was a productive bean field, owned by a retired Sheldon farmer, Dick Wansink. Would he sell? How would he feel about building a Village for disabled adults on his land? It was decided that Bob Hoogeveen and Ken Fertig should approach Dick Wansink personally to find out if he might be willing to sell 27 acres of his fertile farmland for the future campus of Handicap Village. The two men found Mr. Wansink in the Eagle's Club, enjoying a cup of coffee with friends. Since he had retired, Wansink could often be found with his friends. His gentle and warm nature attracted others like the warm sunshine on a cool day. At 75, Wansink's life had been anything but mundane. He had sailed to America from Holland with his family as a young boy, farmed with his father and brothers, had a five year taste of "town living" when he worked in a Sheldon department store, served in the United States Army during World War II, and returned to the farm where he farmed until he retired. Even though Dick Wansink never married, he was far from a loner. He was devoted to his family and his friends. He loved people, and people loved him. Hoogeveen and Fertig approached Mr. Wan sink at his table of friends, and asked if they might speak to him alone. The three men found a private table in the corner. "Dick," Hoogeveen began, carefully choosing the right words, "What have you heard about Sheldon's Handicap Village?" "V ell, I've heard a lot about it. Tis a goot ting, I tink," Mr. Wansink answered in his thick Dutch accent, an accent he never apologized for because he and his family had always been proud of their heritage. The two men, deciding to come right to the point, explained to Dick Wansink that they had looked at his land on the northeast edge of Sheldon, and were very interested in it as a possible site for Handicap Village. Hoogeveen and Fertig then asked if he might consider selling 27 acres of that land. Dick Wansink listened carefully, his eyebrows arched above his glasses and his brow furrowed in thought. He said nothing for what seemed a lifetime to Hoogeveen and Fertig. Finally, breaking the silence, Wansink answered in a matter-of-fact tone, "No, I vill not sell it." Both men instantly felt a slice of disappointment. Their hearts sank. They would have to report their failure to the committee. A fresh search for another piece of land, a second choice, would need to be initiated. "No, I vill not sell my land to you," he repeated with a broad smile, ". . . but, I may gif it to you for the Fillage.”, Hoogeveen and Fertig looked at one another in disbelief. Had they heard him correctly? Had Wansink actually offered to give his land to the Village? Wansink smiled at the two shocked men, and his eyes crinkled with his little boy-look, which belied his 75 years. He nodded and repeated, "I said, 'I vill gif it to you for the Fillage!' "

Bob Hoogeveen, Dick Wansink, and Ken Fertig surveying the 27 acres given to Handicap Village by Mr. Wansink. That 27 acres became the Village campus.

If there had been any doubt about God directing the project before, there was no doubt at that time. It had been an amazing afternoon. Several days later, the three men drove to the northeast edge of Sheldon to survey the 27 acres Dick Wansink had given to Handicap Village. Hoogeveen and Fertig pointed out to Wansink where the cottages, program center and other facilities would eventually be built. Mr. Wansink nodded repeatedly, catching the excitement of it all.

Board of Directors Selected

In February of 1975, seven individuals were selected to serve on the Board of Directors for the future Handicap Village of Northwest Iowa. They were: Dr. Ken Fertig (veterinarian), board president; Dr. Fred Kushner (optometrist), vice president; Rev. Donald Loots (Lutheran pastor), chairman of Pastoral Relations and Church Coordination; Thomas J. Whorley (attorney), legal counsel and board treasurer; Richard A. Schneider (President of Security State Bank), chairman of finance; Ronald Rensink (Insurance Agent), chairman of development; and James Short (Northwestern Bell Supervisor), chairman of personnel. Even though the original seven board members were from the Sheldon area, it was decided that in the near future five additional board members would be selected from a larger area. Also, at that time, the board appointed Bob Hoogeveen as Project Director. He received a year's leave of absence from his position as high school principal. After that year was completed, Hoogeveen resigned his position as principal and became the Executive Director of Handicap Village of Northwest Iowa.